Are you looking for an adorable coming of age young adult/new adult story?

I have just the one for you.

Accidentally Me by Kim Karras is sure to take you through a super exciting life adventure! This new release can be found on both Goodreads and Amazon. Be sure to check out the awesome reviews and grab a copy of your own! Get to know more about Kim here on her blog! 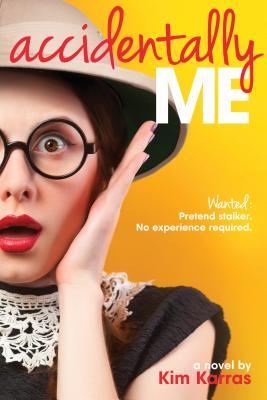 WANTED: Pretend stalker. No experience required. Tall, dark, and quirky preferred. Sabrina is desperate to go to her dream college, but her parents want her to stay close to home. If she wants to maintain her perfect child image, Sabrina must break rules that even her rebel sister keeps . . .
Posted by Michelle Merrill at 8:13 PM 23 comments: 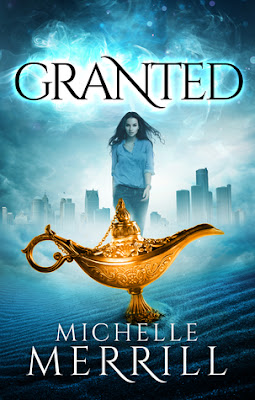 This is the day!

My newest book Granted is now out in the world! Shimmy-shimmy-party-party-throws-confetti-BAM!

Woot woot! So happy you could stop by to celebrate with me!

The eBook is available on Amazon and the paperback will follow shortly! I hope you all enjoy the story. I love the characters and really love how the world came together with a different, but fun, twist on all things genie.

You can find out more about the book and enter to win an autographed physical copy of the book here. Don't forget to add it to your to-read list on goodreads and be sure to review it when you finish. I love getting feedback...it's what polishes me to be a little better.

Thanks for stopping by!

Posted by Michelle Merrill at 7:29 AM 13 comments:

Basically, this is going to be a short post because...this picture speaks a thousand words! My publishers over at Future House Publishing seriously did a fantastic job. Head on over to Goodreads to get the details! Eight days left until the book release! 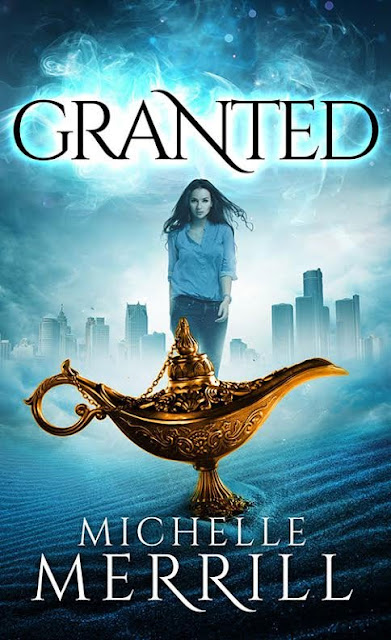 I LOVE when I get to make really exciting announcements!!! Now that everything's official, I finally get to tell you that I've signed with Future House Publishing to publish my YA contemporary fantasy novel, 3 Weeks. Official post here. What's it about? Glad you asked.

It's about a 16-year-old genie, Brielle, who finally gets her first assignment in a place where genies are dying. One broken lamp could be an accident but after three, she knows someone's discovered their secret and wants them gone. She needs a human wish to unlock her magic so she can stop the murderer before she's the next genie to die.

It's filled with mystery, emotions, tension, and of course a splash of romance. I can't wait for it to come out this spring!

Thanks for stopping by.

Cover Reveal for SIGNS OF ATTRACTION by Laura Brown

You guys!!! This book! The cover is amazing. But the story line is seriously breathtaking! I can't wait for you to learn more about Laura's book. First, read this blurb about the book...I can't get over all the awesomeness!

Do you know what hearing loss sounds like? I do.

All my life I've tried to be like you. I've failed.

So I keep it hidden.

But on the day my world crashed down around me, Reed was there.

He showed me just how loud and vibrant silence can be, even when I struggled to understand.

He's unlike anyone I've ever known. His soulful eyes and strong hands pulled me in before I knew what was happening.

And as I saw those hands sign, felt them sparking on me, I knew: imperfect could be perfect.

Because he sees me like no one else has, and I'm afraid of what he'll find if he looks too closely.

The only thing that scares me more than being with him? Letting him go.

Chills, right? It's so lovely! But wait...the cover makes it all even better! Ready? 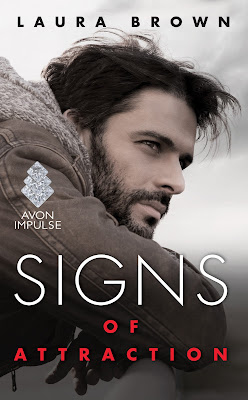 Even the title alone! Gah. I can't wait to get my hands on the real copy! Oh...you too? Well, no need to wait much longer! It's coming June 14, 2016 from Avon Impulse! And you can pre-order it NOW! You can find it on Amazon, Barns & Noble, Goodreads, and right from the Publisher. 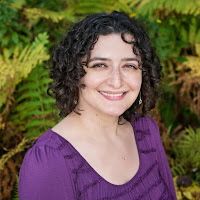 Laura Brown lives in Massachusetts with her quirky abnormal family. Her husband’s put up with her since high school, her young son keeps her on her toes, and her three cats think they deserve more scratches. Hearing loss is a big part of who she is, from her own Hard of Hearing ears, to the characters she creates. 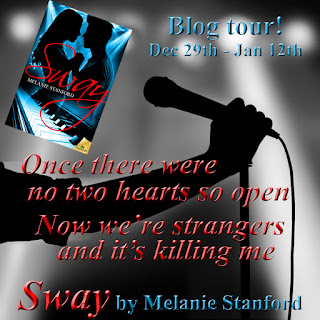 Melanie just happens to be one of my very favorite writing friends, critique partner, and emoji extraordinaire! Seriously, we've had full on conversations with pictures. It's awesome. Anyway, I'm thrilled to have Melanie here today to talk a little more about her book. 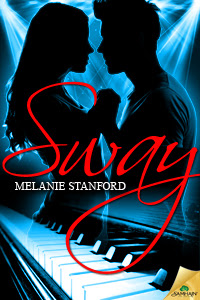 Blurb: She’d be happy to forget…if the past would just stop hitting “replay”.
Ava Elliot never thought she’d become a couch surfer. But with a freshly minted—and worthless—degree from Julliard, and her dad squandering the family fortune, what choice does she have?
Living with her old high school friends, though, has its own drawbacks. Especially when her ex-fiancé Eric Wentworth drops back into her life. Eight years ago, she was too young, too scared of being poor, and too scared of her dad’s disapproval. Dumping him was a big mistake.
In the most ironic of role reversals, Eric is rolling in musical success, and Ava’s starting at the bottom to build her career. Worse, every song Eric sings is an arrow aimed straight for her regrets.
One encounter, one song too many, and Ava can’t go on like this. It’s time to tell Eric the truth, and make a choice. Finally let go of the past, or risk her heart for a second chance with her first love. If he can forgive her…and she can forgive herself.
Product Warnings
Contains an actor whose kisses taste like chocolate, a pianist with scores of regret, and a sexy crooner who just wants his ex to cry him a river.

If you love crooning, swooning, chocolate-smooth love and emotion, you've got to read this. Without further ado, here's Melanie to tell us more about her book!

Hi Michelle and thanks for having me today!

Many authors talk about music inspiration for their books. I think most of us writers either play music while we’re writing, or make up a playlist that goes with our story after it’s written. I do both. For SWAY, my modern-day PERSUASION retelling, music was especially important. My main character, Ava, is a pianist who graduated with a Master’s from Juilliard. Ava’s ex-fiance, Eric Wentworth, the man she’s trying to forget, is a Michael Buble-esque crooner. So it was only natural that music played a big part in the making of this manuscript.
A lot of the songs that Eric sings are from Michael Buble’s CRAZY LOVE album which came out a bit before I wrote my first draft. At one point Eric sings “Cry Me A River” basically to Ava:

Eric wasn’t looking at me as he sang, but I knew he meant the song for me. He’d caught me crying and this is what he thought of it. Talk about a slap in the face.
I clenched my jaw and tried to ignore how much Eric was getting into the song. How much he was enjoying it. How much he meant it, even if the lyrics weren’t completely true. I wanted to run from the room, but I wouldn’t do that again.

While Eric is a crooner, Ava is more into classical music. A big moment for her happens just before the “Cry Me A River” incident. Ava has just seen Eric for the first time after eight years and he’s clearly still very bitter towards her. She escapes to a piano to vent her feelings, playing  “Serenade” by Schubert:

The music filled my ears, my head, my heart, the entire room. The sad melody took me over. Seeing Eric again, the painful and lovely memories from our past, his obvious disregard for me now—all of it bled through my fingers and into the notes.
It wasn’t until the song was over that I realized my cheeks were wet. I hadn’t been able to stop the tears after all. Turning my face, I lifted my fingers to scrub them away when I noticed someone retreating from the doorway.
Eric.

There are over forty songs on SWAY’s playlist, most of which I mention by name in the book. Music really helped me figure out these characters and then show their thoughts and emotions through specific songs. When I hear these songs now, I can’t help but think of Ava and Eric and their story.
*If you want to know what other songs are on the playlist, check out my Twitter feed this month where I’ll be featuring a different song from the book each day.

Thank you Melanie! If you haven't been following, I urge you to check out her song list now. Definitely some great picks for Melanie's story. Thanks for stopping by today friend! To learn more about Melanie and where to find her, check out the info below. Thanks for joining the party! 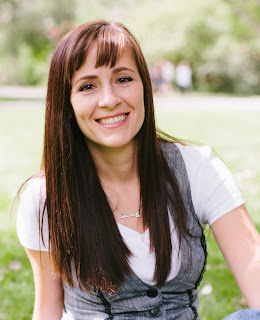 Melanie Stanford reads too much, plays music too loud, is sometimes dancing, and always daydreaming. She would also like her very own TARDIS, but only to travel to the past. She lives in Alberta, Canada with her husband, four kids, and ridiculous amounts of snow. You can find her on Twitter @MelMStanford, on Facebook @ MelanieStanfordauthor, and her website melaniestanfordbooks.com

a Rafflecopter giveaway
Posted by Michelle Merrill at 10:33 PM 8 comments: