Since joining twitter, I've found that the best thing besides meeting other writer's is finding out about contests! Seriously, if you're not tweeting yet, get to it. Find different authors, agents, writer's and follow them.

Here are three contests either currently running or coming up in the next couple of weeks!

Adventures in YA & Children's Publishing is hosting a Pitch+250 contest! It's running now and closes either on May 3rd or after they get 100 submissions. So go polish your 100 word pitch and first 250 and email it over right away!

The Writer's Voice starts in 2 days! Haven't heard of it? Go here to check out the details.

And last, but not least, Query Kombat is launching on May 13th! The details are here and you still have time to win a free pass by posting your book nickname by May 3rd!

Good luck everyone! I'll see you there :)

Another one bites the dust!

It's a YA contemporary called, The Worst Job Ever, with a little humor and a little romance. Just the way I like it :)

It's filled with all the great YA problems: family troubles, friend issues, good boys, bad boys, stuck up classmates, work problems, school dilemmas, etc. All crammed together in 27 chapters and 70,000 words. Trust me, they don't like being crammed together. And that's what makes it so awesome!

There are fights, handsy boys, crazy parties, jealous girls...and one of my favorite things about it is the format. Weird, right? It's rockin' awesome! It makes me so excited.

Of course, right now it's still first draft material. The characters are a little flat, the internal monologue is really confusing, and the pacing is all over the place.

But at least I now have something to work with! I'm going to give it some space and revise my YA fantasy. And, of course, continue to suppress all the great ideas that are taking over my mind.

How is your writing coming? Are you in the excitement of a first draft or in the trenches of revisions?
Posted by Michelle Merrill at 1:51 PM 7 comments:

About twenty minutes later, I finished my piece, read through it with my hubby, and sent away...then decided to post it here.

Remember, this was written quickly and just for fun. And I definitely had fun :)

Seven hundred and fifty miles and I had finally made it to try out for American Idol. The line wound around the side of the building and stretched back and forth across the parking lot. Even though it was really long, my stomach fluttered with excitement.

Nothing could ruin this day. Except, of course, failing the try-out…but I wouldn’t let that worry me until it was over.

But what if I didn’t make it? What would my friends think? My steps were quick and shaky. The judges had to like me. I’d won the school talent show three years in a row with my voice. How could they refuse?

The guy in front of me in line was probably mid-thirties with an overgrown beard that put my few facial whiskers to shame. I rubbed my chin and cursed myself for not shaving. They would definitely see the two hairs and then the audition would be shot…unless my voice could distract them from the gruesome sight.

I could win, be a star, tour the country playin’ my guitar.

But what if I didn’t get any votes?

Ugh, I needed a distraction. And as much as I didn’t want it to be from ‘Sasquatch’ in front of me, I had no other choice.

I cleared my throat and tapped his shoulder. “Yo,” I said.

The man/beast turned around and eyed me. “Is that even a word?”

Sasquatch frowned. “Hay is for horses.”

I laughed, sure he was trying to pull my leg. “Where are you from?”

The man looked down his long nose and made me feel small, and I’m six foot. Then he scratched the curve of his beard and grunted, “Boring.”

I rocked on the heels of my feet at his response. “Oh. Right. Well, I guess this is kind of boring.”

A bushy eyebrow rose. “If you say so.”

Sasquatch leaned to the side. “No. I told you I was from Boring.”

My eyebrows pinched together. “There’s a place called Boring? No way.”

The man spit a huge loogie next to my feet and my stomach churned. “It’s by Happy Valley.”

My jaw dropped and I gaped at him for a quick moment. “Right. I know where that is.” Not.

“Sandy what?” I snapped, challenging his wit.

“Not Sandy what, Sandy where.”

“Where?” I asked, really confused at this point.

“In Oregon.” Sasquatch shifted from side to side like this really was getting boring.

I glanced at his flannel shirt tucked around the beer gut that hung over a navy pair of jeans. This conversation wasn’t going anywhere, but it got my mind off the audition and the line was now moving.

I decided to keep it going. Otherwise, my heart was going to beat right out of my chest. “What kind of music do you sing?”

The man cleaned his teeth with his tongue and worked out something black with a fingernail. “I don’t.”

Again, I couldn’t stop the laugh. “Good one.”

He frowned. “I wasn’t trying to be good.”

The man paused and ran a burly hand through his beard. “But I didn’t tell a joke.”

“You said you don’t sing. I thought it was funny because this is a singing contest.”

The man whipped his head around so fast, I thought it would snap right off. He stared at the long line, his eyes following the throng of people leading back to us.

“What did you think this audition was for?” I asked.

“This is So You Think You Can Dance, right?”

I almost choked on another laugh. He thought he could dance? Maybe he could a long time ago. A really, really long time ago. I almost wished I could watch his performance. Shocking would be putting it lightly.

His face turned into a nasty snarl. “I never get my times mixed up. I’m sure I’m here for the dancing contest.”

“Nope. This is American Idol.” Yes, I even said it like the announcer.

Sasquatch turned on me. “You lie.”

I shook my head. “One of us is in the wrong place.”

Suddenly, I heard voices behind me. The conversation confirmed my worst fears. “…ballroom dance for my audition.”

Wanna give it a try?
Posted by Michelle Merrill at 9:32 PM 6 comments:

One of my favorite things is meeting up with other writer's. I haven't met very many of them, but I did have the privilege of growing up with a dear friend and fellow writer, Shallee McArthur.

If you don't know her, click on her name and get over there! She's a talented, smart, funny, caring, and ultimate plotting genius. And when I was down in Utah visiting family for spring break, I made sure to visit her too. Here are a few pictures! 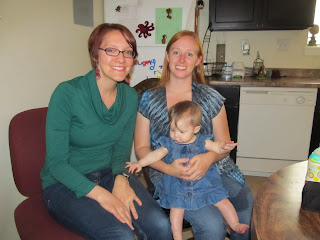 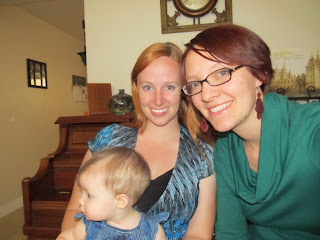 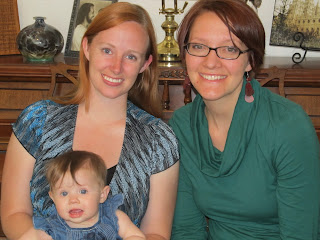 Yes, we both have red hair. No, it's not natural, but we can dream...and dye, right? Dream and dye. That sounds terrible, but would be a great title.

In writing news, I only have seven more chapters left on my current WIP. It's been interesting and I can't wait to give it space and work on something else. I have another MS that's vying for my time and two other ideas battling it out in my head. Life is never boring for a writer. Even when my mouth is closed and quiet, my head is full and loud!

How is your writing coming? Do you ever get to meet up with other writer's?