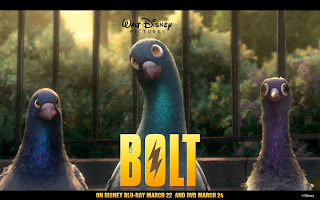 Blake:  No way!  Wow!  Bolt, I'm a really big fan of yours, brother.  I'm Blake, this is my writing partner, Tom.  Say what's up.
Tom:  What's up.
Billy:  Wow!
Blake:  Oh, and this is our personal assistant Billy, who was supposed to wait up on the wire.
Billy:  Bolt I've admired you for such a long time and there's something I've always wanted to tell you if I ever got a chance to meet you.
Blake:  Uh, oh okay.  Billy, that was terrifying.  What you just did...
After the first two pigeons send the third, Billy, away, it goes like this.
Bolt:  Okay, guys.  But I've really gotta get going.
Blake:  I know you're a busy dog, but if you've got a second, we'd love to pitch you an idea for your show.
Tip number one:  Don't attack the agent like Billy did.  Chat with them and if the opportunity opens up, then pitch them the idea.  But don't smother them with it just after meeting you.
Tip number two:  If the agent says that they need to go, it's a good idea to let them go.  Don't be like Blake and jump right into it after that announcement.  They'll probably be a little annoyed that they have to respect common courtesy just to sit there and listen to you politely before they nod their head, give a short thanks, and leave.
If you want to know the proper ways to pitch an idea to an agent at a writing conference then learn about it.  You can google it or just check out one of these websites (that I just googled).  http://www.writing-world.com/publish/pitch.shtml   http://www.writing-world.com/publish/pitch2.shtml  http://www.techchi.com/?p=452  http://www.guidetoliteraryagents.com/blog/How+To+Pitch+A+Literary+Agent+In+Person.aspx
Good luck and happy pitching!
Posted by Michelle Merrill at 9:58 PM