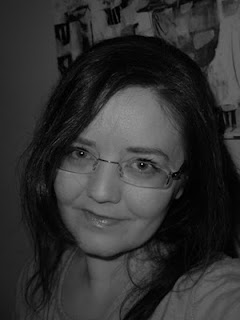 When you check out Tessa Quin's blog, she'll tell you, "I'm a 32 year old mother of three-year-old twins and live with my husband in Iceland. I'm also a first-time writer of a novel, and my dream is to become a professional author."
The first time I saw the name Tessa Quin was during the always fabulous writeoncon conference this summer.  Of course, I wasn't very brave back then (translates into I didn't have time) so I didn't actually talk to very many people.  I'm so glad I got this chance to get to know Tessa, though.  Even better, you get to find out more about her too!

Tessa says that she had to stop playing World of Warcraft Online to write – because WoW is a time-eating monster. She's also been a vampire fanatic since she saw “Interview with a Vampire” as a young teen, and she knows the words by heart.

And here’s the big one... She says, "I almost never admit this to people... I used to idolize Michael Jackson from age seven to sixteen. Yes. I was the one in the wall-papered room with the tiniest pictures to huge posters. I even had a mask. He had a huge impact on my early life. I wasn’t interested in other boys, because I kept daydreaming about him. I still haven’t tasted alcohol or smoked cigarettes. I stopped eating sweets and drink sodas – I still don’t drink sugared sodas today. My fiction characters usually have black hair, and I suspect it’s because of him. I sometimes cringe when I hear his voice singing today, but I can’t deny that most of his songs are good. I was sad when he died, but I didn’t cry. I somehow got converted from Michael Jackson to heavy metal. I have no idea how."

Now we'll get down to the writing questions.

How long have you been writing?

I used to write stories as a kid, and I tried for publication in Iceland when I was fifteen, but I got rejected. I only tried one publication, and, well, you know how sensitive teenagers can get. So I gave up writing until I read the Harry Potter books in 2003. I wrote fanfiction about Snape. It was roughly 40,000 words, but that was it until I read Twilight in 2009. I‘d had a story idea in my head and loads of notes by that time. So, in summer 2009 I took a month off from work and wrote the first draft. I kept improving it until spring 2010, when I spent months writing a query letter. I shipped it off in July to loads of agents, but every single one rejected. Why? Horrific query letter, way too much backstory, and not the best writing. So I‘ve been taking a crash course in writing ever since and I‘m amazed at how much my writing has developed. I‘m currently working on rewriting the manuscript from scratch. (Way to go!)


What made you want to write?
I‘ve always had it in me. It comes very naturally to me. You could say I‘m in my element when I write. I was probably the only kid at school who squee’ed when we had to write an essay. But I have to say that reading Harry Potter made me want to write again, and then after reading Twilight I figured that if Meyer could publish, then I should be able to as well. Oh! By that I don‘t mean that I thought her writing was bad. I just saw how my genre was becoming popular and thought this was the time to write. But I’ve been a bad-case of a daydreamer since childhood, with very wild stories in my head.


Do you have any pet peeves while writing?  Any certain music or drink you just have to have to concentrate?
Pet peeves? Most definitely! I can‘t write if there‘s noise around me (which means I can‘t write when my kids are around), and I can‘t have the internet turned on, or I‘m tempted to read blogs and such. I cannot write with music. (I'm the same way.  Totally know what you mean.)  I have to have a glass of tab water (which is pure as crystal in Iceland and so, so yummy), preferably with ice cubes to munch on. Chocolate doesn‘t hurt either, but I‘m trying to cut down.


What is your favorite thing to write?
YA Paranormal and Fantasy (yes, I‘m aware that I‘m capitalizing them). I‘m currently more in the YA (light-)Fantasy category, but I love reading Paranormal and might try my hand at one some day.


What other genre's do you enjoy writing, if any?
I‘ve got a story idea for a YA gay novel (M/M), but I don‘t know if I should publish it under the same name (it wouldn‘t be a problem in Iceland, but things seem to work differently in America). I also have two story ideas for adult novels, one humour, and the other suspense, but I‘m going to focus on YA right now.


What is your favorite genre to read?
YA Paranormal. Sometimes Adult Paranormal. Well, only Charleine Harris‘s Sookie Stackhouse novels, really, in the adult section.


What is your favorite blog?
Jackson Pierce‘s vlogs, at the moment. And also Melissa Gill‘s, Quinn‘s, Rachael Harrie‘s, Marieke‘s. Oh goodness. There are so many. I have them all in Google Reader and check them out randomly in the evening when I‘m too tired to do anything else.


Have you been to a conference?  If you've been to more than one, which was your favorite and why?
I have! I had the wonderful opportunity to attend two online conferences this year. It was WriteOnCon in August (I threw my family out of the house for that one), and The Muse Online Writer‘s Conference...which I sort of forgot because I was up to my ears in university studies. But I have access to their forum + material. The WriteOnCon was definitely my favourite and I learned so, so much there. (Me too.  I went in knowing nothing and left feeling like I'd learned some great secrets, which of course weren't secrets at all, I just didn't know anything about writing at the time.)


Which author's do you admire?
Charleine Harris has to be first! Then J.K. Rowling, Stephenie Meyer, Cynthia Hand (new author of Unearthly), and Christopher Paolini (I love the Eragon books).


How often do you write?
*Blush* Not as often as I should. I have the university excuse, but it‘s not good enough. Let‘s see... Okay, what I‘m gonna say is that it depends. If I dive into a project, I‘m dead to the world. I‘ll spend every day, and almost every waking hour to write. But then I take pauses in between projects.


One last thing about Tessa.  She says, "And...Tessa Quin isn't my real name. My real name is not a secret - it just looks Klingon to foreigners."  I've seen it and it's another name I'd definitely add to my 'don't even try to pronounce that' list.


Thanks so much Tessa!  I loved getting to know more about you and finding the things we have in common.  Good luck with your future writing (on your new spiffy machine).  :)
Posted by Michelle Merrill at 7:20 AM