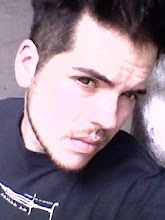 It's great to have Quinn here with us today.  When you visit his blog, which you should all do right after you read about him, you'll find this picture and quick Quinn-in-a-paragraph blurb.
I am 25 years old. I graduated from the University of Delaware in 2006 with a degree in Interpersonal Communication and in Russian Studies. I am fluent in Russian, retain some understanding of Spanish and am currently studying Korean -- that's a lie; I'm not studying, I just pick up languages easily. I am currently teaching English in South Korea and have spent the last three years doing this. Last year, I completed the first book in my Dreamwalker series, THE GATEWAY. The rest of the series is outlined. I also just finished a young adult paranormal romance titled SEEING that I'm about to start editing.


Be sure to check out his about page as well, to get the whole back story.


Keep reading, though, because there are some great things to know about him below!

How long have you been writing?
I first started by writing poetry throughout high school and college. I actually got suspended for writing a poem in high school. Long story short, it was about this girl at the school, someone got a copy of it, made copies and the next day everyone at school was walking around with a copy and quoting it. I was the main writer, but there were three others who contributed ... that's how this other girl's name worked it's way into the poem. I became known as the poet -- by other students and teachers.  (That's awesome, unless it was embarrassing. :))
I wrote my first novel last year in January.  (Ooh, me too!  Awesomeness.)

What made you want to write?
It's going to sound stupid, but it was Britney Spear's music video for "Oops, I did it again." I got an idea for a character from watching the video and planned out a novel and it's sequel -- I was thirteen or fourteen at the time. I never wrote the novel because it got too complicated, but I kept trying after that (I think I have like three novels that I've planned out and then shelved for one reason or another).  (My list of shelved novels expounds daily.  One day...)

Do you have any pet peeves while writing?  Any certain music or drink you just have to have to concentrate?
I'm not sure that I have any pet peeves while writing. The only thing that's weird is that sometimes I have to write by hand. I can sit and sit and stare at a computer all day and never write a word, but as soon as I put pen to paper, the words just flow. Sometimes though, it's the opposite and I can't write unless I'm in front of a computer. I've never figured it out. (Sounds slightly frustrating for it to not be a set thing, but great that if one doesn't work, the other one most likely will!)
As for a certain drink I need to concentrate ... coffee.
With music, I listen to whatever captures the mood of the scene I'm trying to write ... or the character. One of my characters in my book SEEING was inspired by Allison Iraheta from American Idol. When I would write that character's scenes, I would listen to Allison's songs to get the voice and attitude right. (That's a great idea.)

What other genre's do you enjoy writing, if any?
The first novel I wrote was a YA Fantasy. The second was YA Paranormal Romance. I like to stay in those two genres.  (Awesome!  Those are my two main genre's as well.  They're so thrilling and the possibilities are endless.)

What is your favorite genre to read?
Same as what I write. I recently finished THE HUNGER GAMES trilogy though and may have to start branching out of the Fantasy/Paranormal genres because I loved it so much.

What is your favorite blog?
It's hard to choose just one blog, but Elena Solodow's blog, You're Write: Except when you're Rong, is always hilarious. (I'll go find it for sure.  I can always use a good laugh.)

Have you been to a conference?  If you've been to more than one, which was your favorite and why?
I haven't been to a conference. I really want to, but there's not much of an opportunity here in Seoul. (You weren't at writeoncon?  You HAVE to be there next year if you weren't.  Two words:  online and free!  You can participate anywhere.  It's fabulous.  I never thought I could learn so much in one week.  I was proved wrong in so many ways!)

Which author's do you admire?
The funny thing is, I prepared a TOEFL response for this question to show my students how to do it. I won't bore you with that though. I admire J.K. Rowling for the obvious reasons and I admire Stephenie Meyer. With Stephenie Meyer, love her or hate her, I think you have to at least admire her.  (Okay, don't judge but I don't know what TOEFL even means.  It's sounds deep though.)

How often do you write?
Lately, not as often as I'd like. When I'm in the process of writing a novel, I try to write any time during the day I can get -- sometimes that can be very little, sometimes it can be all day long and well into the night. I'm not a morning person though, so most of my writing takes place after work -- 11 pm -- and then goes on until I can't stay awake any longer.  (Morning?  There are still morning people in the world?  Just kidding, I'm married to one, but all my writing is at night too.)
Thanks Quinn for taking the time out of your busy schedule to answer these questions.  It was a blast to get to know more about you.  I'm not kidding when I say that EVERYONE should go over to his blog this instant!


Posted by Michelle Merrill at 7:03 AM