Who's Devin Bond?  Well, I'll let her tell you a little about herself (taken from her awesome blog).

I'm a 20-year-old YA writer with a passion for mythology. I currently have my sights on the far north, but that's as much as you're going to get from me! I'm also pretty bad about liking a lot of genres. We'll see how that works out in the publishing industry. As for my picture. I'm the one on the left. The right is my writing partner, Jessica.
Devin's in my Crusade group and it's been a lot of fun getting to know more about her.  Oh wait, you want to know more about her too?  Perfect!  Keep on reading.
Devin, how long have you been writing?
Um, forever. I started writing when I was about 8--though I can say that I royally sucked back then. I didn't write seriously until I was about 13 (royally sucked then, too. I sometimes read stories from back then and go "I thought this was good?!") and then I actually got it in my mind that I could write something original--and something I'd be willing to share with the universe--last year.  So... take any age you'd like :P
(Cool!  That's awesome that you can go back and read things you've written throughout your life!)

And what made you want to write?
I've always been really shy and quiet. I used to get bullied when I was younger, so writing was kind of a way to just... let my mind be free. I started out just being a really avid reader, but then I just thought "hey, I can do this too!" (Thanks to my 2nd grade teacher who made the entire class write books for our parents. I think mine was the best... kidding~) Writing's always been the way to get my voice/thoughts out without ever actually having to speak it.
(It's good to have an outlet, and what better way to understand your feelings and emotions than writing them out?  Yay for teachers!)

Do you have any pet peeves while writing?
Yes. I'm really persnickety about writing. I think if someone were in my head, they'd be annoyed with me. Anyway, my parents always want to talk to me when I start writing and I always feel like writing when they've got the TV on. (I get distracted way too easily.) Also, I'm a very odd sort of perfectionist. I can't just write if I feel like what I have already is bad. Similar to that, I get stuck on finding the right words. I've began to use fillers just so I don't stop for an hour trying to figure out a stupid word. Another peeve is discovering the word I want doesn't exist. Like "unamused." Why doesn't it exist?!
(Make it exist!  You know writer's make up their own words all the time.  If it makes sense, I say use it.  On that note, I'm not sure I've ever heard the word persnickety but I LOVE it!)

So, what are your favorite genres to write?
Fantasy is my absolute favorite. Science fiction is a very close second. Paranormal fantasy/urban fantasy are counted in to those two (in my mind). I generally have romance with whatever I'm writing too, though not all the time. ...Probably 97% of the time...  I like the thrill and challenge of getting two characters to fall in love--realistically.

Quick, you only have five minutes to check one or two writing blogs, which ones would you go to?
Hmm, generally I just go for the top of the list, but if I have to choose, it'd be Jessica Lei, Aun-Juli, and then it's really a tie between Misha, Christina Lee and Lindsay N. Currie. I don't really like to single people out though. I read whatever posts look interesting and comment if I've got something worth saying. (Sometimes I comment without though :P)
(Awesome!  Thanks for the links.)

If you could pick the setting of one book to live in, which would it be?
No brainer, I'd want to live in the magical world of Harry Potter.  I used to hope that I'd get a Hogwarts letter and McGonagall could come to my house to convince my parents that magic was real. Of course, I knew deep down it wouldn't happen and that I was stuck in the muggle world for all eternity, but who in the heck wants to imagine real life? Also wouldn't mind living in Ender's world in Ender's Game (or any of the various sequels/side novels).
(Oh, the magical world of Harry Potter.  That would definitely be something!)
What's your favorite:
Book- There are many but the Harry Potter series trumps them all!
Author-  Ugh, talk about stuck between a rock and a hard place. I'm just gonna be predictable and say J. K. Rowling. Some might think her writing isn't the best, but just look at how many dang plots and characters she weaved together to create this story! (Agreed.)
Character- Going with someone outside Potterverse for a moment. Bean - Enders Game/Enders Shadow Series.
Thing about writing- Everything! But I like coming up with characters the most.
Time of the day- Dusk! Or nighttime. Though, there are good parts about every part of the day :)


And last, but not least, do you prefer fruity candy or chocolate?
Fruity candy all the way! Especially if it's sour fruity candy. That's the best.
(Agreed again!  Sour only makes it better.) 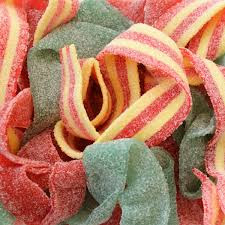 Here, have some :)
Thanks Devin for telling us a little more about the writing side of you!
Go check out her blog, and have a great weekend!
Posted by Michelle Merrill at 10:32 PM